Risk Innovation explores the complex ways in which technological risks, social risks, and organizational risks intertwine. And we often get asked: what does that mean for me and my organization?

On Monday, June 1, Facebook employees participated in a virtual walkout – the most significant collective worker action in the company’s 15-year history. In the wake of the murder of George Floyd and subsequent #blacklivesmatter protests nationwide, Twitter took a stand against tweets posted by President Trump, while Facebook made the tough yet thorough decision not to intervene with posts. While Twitter and Facebook both have policies and standards in place to combat voter suppression, hate, and inciting violence, today only Twitter is enforcing those standards. Facebook is not.
And so Facebook employees sign off in protest.

As the story unfolds, what are the social and organizational risks Facebook should be prepared to navigate? From Social Justice & Equity and Ethics to Standards and Reputation & Trust, the Risk Innovation Nexus invites users to explore ‘orphan risks’ – risks that are hard to quantify and all too easily ignored, yet often critically important to an organization’s future success.

Orphan risks are often pushed aside, overlooked, or shrugged off. But their impact can be costly. What can Facebook do to address the social and organizational issues that have been bubbling for a while, and are now on the verge of erupting? While this may seem like an unprecedented challenge with no playbook to follow, unfortunately, we have seen similar cases with nearly identical fallout from big tech before.

Let’s take a look back at Google’s 2018 contract with the US Department of Defense – Project Maven – and the very public and very costly lesson they learned. Project Maven used computer learning to increase the ability of weapon systems to detect objects, explicitly supporting counterinsurgency, counterterrorism, and increasing the lethality of the military. It was a project that was perceived to run counter to the values of many employees, and what they considered to be the company’s underlying ethos as exemplified by its former motto “Don’t be Evil.”

What went wrong: After finding out about the Project Maven contract, over 4,000 Google employees signed a letter to the company’s leadership in protest, requesting the contract be canceled and that Google create and enforce a clear policy against building warfare technology.

Consequences: After defending the contract, over a dozen senior engineers, representing top global talent, resigned from Google. Google ultimately chose not to renew the Project Maven contract – which was planned to grow to $250 million per year.

For more details, the Risk Innovation Nexus has written a full case study on this event.

Though it’s not surprising that a technology company would already be thinking about tech-related risks, it may come as a surprise just how much of a blindsiding impact social risks can have. Take another look at our case study on Google’s Project Maven – the risk landscape we plotted shows that Google had accounted for and anticipated their technology risks (in that middle column) but had not so thoroughly planned for their social and organizational risks. 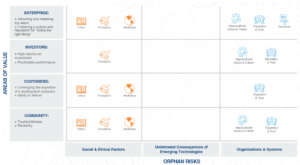 Organizational values create and inform organizational culture, and a company benefits from successfully operationalizing both. By asking questions like “do my company’s values reflect what is important to both the founders and members?” and “have we explicitly addressed the steps we will take when faced with an opportunity that may conflict with these values?” Google could have ensured that action-steps were in place to operationalize the values that were most important to their stakeholders.

Company policy and organizational culture aren’t easily changed, especially on a large scale like Google or Facebook. In fact, Twitter has been working for more than a year building an infrastructure to limit the impact of objectionable messages from world leaders and creating rules on what is and is not allowed. Luckily, risk innovation isn’t a one-time-solution to a one-time-problem.

Risk innovation is a mindset that, when practiced, allows organizations to see the big picture and informs their decision-making. Risk innovation encourages taking specific, actionable steps – starting now – that lead to a long term strategy for success. For Facebook, and other organizations that are struggling to navigate an increasingly complex risk landscape, we suggest identifying what is most important to your stakeholders – employees, investors, customers, community – and taking steps to protect those areas of value.

Please check back as we continue to follow Facebook’s orphan risk landscape.
In the meantime, we encourage you to explore our library of case studies and hypothetical risk scenarios for an increased understanding of the risk innovation approach and its relevance to enterprises similar to your own.

© 2019 Arizona Board of Regents on behalf of Arizona State University